Improv and religion go hand in hand. Now, I know, yo’ mama told you not to talk about religion and politics, but this blog throws mama’s sentiment out of the window. Don’t want to read about improv & religion? Click the ? in the top right corner and Bye Felicia.

Improv, for many, can be a religious experience. For those of you involved, you know the feeling – you take a good class with a great instructor, you want to tell everyone about it; you perform a show, you want to blast in on facebook. For those of you not directly involved also know the feeling – that improviser is contagiously pushing you to perform, take classes or be the ear for improv excitement. Similarly, people involved in deep religious beliefs do the same – they may hear a good sermon and want to tell everyone about it; they read an inspiring quote or passage, they want as many people to know on social media or in person. Hell, some even knock on your damn door their so excited.

Last month, the National Geographic Channel premiered an insightful series hosted by arguably the most recognizable voices, Morgan Freeman. Morgan Freeman hosts The Stories of God and dives deep, deep into God and religion. If you have not had an opportunity to see it, check it out. There was a similar television series by the same name produced by BBC. The show The Stories of God is a captivating journey into religion and its many forms. Freeman travels the globe in the hopes to learn about one thing: God.

Different traditions; different languages; different names for God; different types of architecture; different geography; different cultures; different prayers; different chants; different emphasises; one God. Despite their countless differences, all of the believers Morgan Freeman spoke to a higher being, a higher power. For the lack of better words, one magical spirit that provides the soul peace.

Hearing the eclectic group of spiritual leaders speak, there was a common thread. They were all declaring the same message, but simply conveying it through different forms. Remarkably, on a universal level, everybody believes the same thing. Religion evokes the thought that there is something beyond human life – something spiritually larger, indescribable by human perception.

Even more remarkably, the same is true for improvisation and the study of the art. In the most simplest of terms, improv is religion. It could be argued that the arts are the over-arching religion, but this analogy is far more microscopic on the improvisational theater community and its reach. At the end of the day, every improviser, everywhere in the world, believes in something beyond goofy-character-work, pantomine-where-work or raw scene-work; everyone believes in Improv.

Different theaters have different warm-ups; different leaders; different shows; different names for games; different spaces; different geography; different audiences; different emphasises; one Improv. Much like The Stories of God spotlights, everyone, in the grand scheme of things, believes in the same indescribable being; improv. Chicago is a great example of this analogy at work. There are many wonderful theaters in the city of Chicago – including Annoyance Theater, ComedySportz, Improv Den, iO Chicago, Stage 773, The Playground, The Second City, Under the Gun Theater to name a few, truly. The cultivation of such a vibrant and diverse community comes from the same belief [improv], but emanate that [improv] belief in different forms. 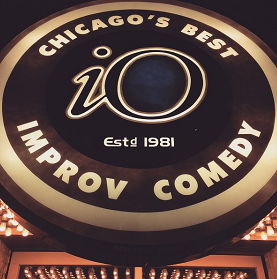 Improvisation is a unique form of theatrical comedy. There are theaters where the primary goal for the improv comedy ensembles is to make the audiences laugh. There are experimental ensembles with the only intention to make the audience feel an emotion, without an emphasis on laughter. Some productions have a more humble approach; using improvisation as therapy. Others use the art of improvisational theater as entertaining, high-end productions like The Second City and Denver Center for the Performing Arts. The key is every interpretation has a place in the improv world.

Denver’s improv circuit is booming and has sundry selection for education and live comedy, unique for a growing city. There are incredible things happening in and around Denver. The marijuana legalization has opened a niche for comedy shows centered around cannabis. Theaters all over Mile High City – like the Voodoo Comedy Playhouse – offer classes and shows. Like religion, explore all of the improv. Knowing what theory or belief you want to follow begins with being informed and educated; this art is your journey.

Follow your heart and surround yourself with the community that vibrates your soul. Why? Improv.

Jon Jon Lannen is a writer, performer and instructor at Voodoo Comedy. He loves improv, dogs and sparkling water. Learn more about him here.

« Improv is like Religion
Tragedy, Comedy – Part I »
We use cookies to ensure that we give you the best experience on our website. If you continue to use this site we will assume that you are happy with it.Ok
All sales are final and no refunds are permitted. All guests must be 18+ (21+ after 10:00 PM), with valid photo ID.